Mind over matter...Never give up


I decided to do the Cary Road Race 10K this year as a lead in to the Biltmore 15K in May.  It's close by and a nice course that I am familiar with.  I had run it in 2009 and it was a good event.  Also Owen was interested in doing the 5K so I figured we could both run that together.  I drove separate from Keith to run the 10K and Keith would later meet me there with Owen so we could then do the 5K.  I was not sure what to expect as far as competition but expected the 5K to be more competitive than the 10K.  It turned out that I was wrong however.  I knew at the starting line that there was at least one faster woman and assumed that there would possibly be others as a race in Cary tends to draw a different group than the ones in Raleigh do.

As the race started I was in second place but wasn't sure if I would hold onto that.  The race is just two repeats of the same course and there is a fairly big hill early in the race and then you have to go back and do it again.  But after getting past the hill I felt better.  I ran the first mile in 6:25, so probably a bit fast.  My main goal was just to PR which should be doable since I don't often run 10Ks and the current PR was from the Cary Road Race in 2009 at was around 44 minutes.  Mile 2 was back down the hill so I did that much faster in 6:19 and felt pretty good.  Then the course evens out to be more flat but going out a bit fast in the first 2 miles caught up with me and I did mile 3 in 6:39, so not too bad but definitely slower than the first two.

Mile 4 goes back up the hill and I was wishing by this time that I had done the 5K.  There was a younger girl in her 20s in a heavy sweatshirt who at this point had passed me, and then I'd pass her, and so on.  But I was basically running as fast as I really could at that point so was more focused on time and finishing than maintaining my place.  I ran mile 4 slower in 6:57.  Since mile 5 is downhill again, I was able to pick up the pace a bit at 6:24.  I was pretty spent by mile 6 and somewhere between 5 and 6 a bug decided to do a kamikaze flight into my throat.  Also another woman passed me around this time and I really felt I couldn't pick the pace back up so I did mile 6 in 6:55, slower than I'd hoped but still my average pace was way better than the last time I did this race 3 years ago.  To my surprise the finish line seemed to come quickly and in fact did because the course was short, by a lot actually.  According to my Garmin, it was 6.03 miles.  I finished in 39:46, 6:24 pace.  A PR by a lot but of course since the course was short it was likely that my time should have been around 41 minutes instead of sub 40.
In the end I came in 4th overall but first masters female.  I quickly went to find Keith and Owen before the start of his race.  Due to the bug incident and pushing the pace, I was feeling quite nauseous but had to run the 5K with Owen and felt better after we started running.  Luckily he was in a very good mood and did a great job running the 5K, talking and having fun the entire way (not always the way it goes!).  He was quite impressed to see a barefoot runner (Shannon's husband Anthony) and also one of our neighbors running the race and he had lots of fun shushing me so he could "concentrate" on his race instead of me talking to him.

Owen ended up with a huge PR as well, finishing in 34:41.  We got back just in time for the 10K awards for the masters category so I was able to get my gift card and Owen took a few pictures.  I was glad I ran the 10K but moreso glad that Owen had such a great race. 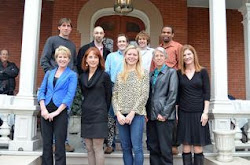 Me with Barrel Monster and Owen Monster

Best running group ever, click on the photo to find out more!

Best Races I've Run and Why

Mary
Cary, NC, United States
I've been a runner since I was 13 so that's getting to be a long time now. It's been a constant in my life, something I have taken time off from here and there but always go back to. I've met many new friends through running and also spent much needed time alone to think while running. I am thankful that it's a part of my life.